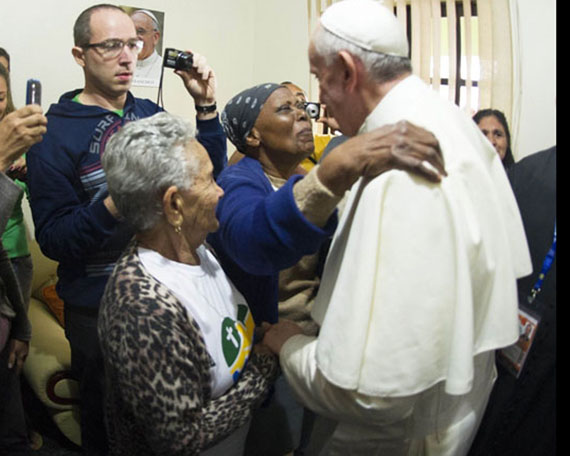 Aparecida: a key for interpreting the Church’s mission

At the beginning of the Aparecida event, there were poor fishermen looking for food. So much hunger and so few resources. People always need bread. People always start with their needs, even today.

They have a dilapidated, ill-fitted boat; their nets are old and perhaps torn, insufficient.

First comes the effort, perhaps the weariness, of the catch, yet the results are negligible: a failure, time wasted. For all their work, the nets are empty.

Then, when God wills it, God mysteriously enters the scene. The waters are deep and yet they always conceal the possibility of a revelation of God. God appeared out of the blue, who knows for how long, when God was no longer expected. The patience of those who await God is always tested. And God arrived in a novel fashion, since God is wonder: as a fragile clay statue, darkened by the waters of the river and aged by the passage of time. God always enters clothed in poverty, littleness.

Then there is the statue itself of the Immaculate Conception. First, the body appeared, then the head, then the head was joined to the body: unity. What had been broken is restored and becomes one. Colonial Brazil had been divided by the shameful wall of slavery. Our Lady of Aparecida appears with a black face, first separated, and then united in the hands of the fishermen.

Here there is a message which God wants to teach us. God's own beauty, reflected in his Mother conceived without original sin, emerges from the darkness of the river. In Aparecida, from the beginning, God’s message was one of restoring what was broken, reuniting what had been divided. Walls, chasms, differences which still exist today are destined to disappear. The Church cannot neglect this lesson: she is called to be a means of reconciliation.

The fishermen do not dismiss the mystery encountered in the river, even if it is a mystery which seems incomplete. They do not throw away the pieces of the mystery. They await its completion. And this does not take long to come. There is a wisdom here that we need to learn. There are pieces of the mystery, like the stones of a mosaic, which we encounter. We are impatient, anxious to see the whole picture, but God lets us see things slowly, quietly. The Church also has to learn how to wait.

Then the fishermen bring the mystery home. Ordinary people always have room to take in the mystery. Perhaps we have reduced our way of speaking about mystery to rational explanations; but for ordinary people the mystery enters through the heart. In the homes of the poor, God always finds a place.

The fishermen “bundle up” the mystery, they clothe the Virgin drawn from the waters as if she were cold and needed to be warmed. God asks for shelter in the warmest part of ourselves: our heart. God himself releases the heat we need, but first God enters like a shrewd beggar. The fishermen wrap the mystery of the Virgin with the lowly mantle of their faith. They call their neighbours to see its rediscovered beauty; they all gather around and relate their troubles in its presence and they entrust their causes to it. In this way they enable God’s plan to be accomplished: first comes one grace, then another; one grace leads to another; one grace prepares for another. God gradually unfolds the mysterious humility of his power.

There is much we can learn from the approach of the fishermen. About a Church which makes room for God’s mystery; a Church which harbours that mystery in such a way that it can entice people, attract them. Only the beauty of God can attract. God’s way is through enticement which attracts us. God lets himself be brought home. He awakens in us a desire to keep him and his life in our homes, in our hearts. God reawakens in us a desire to call our neighbours in order to make known God's beauty. Mission is born precisely from this divine allure, by this amazement born of encounter. We speak about mission, about a missionary Church. I think of those fishermen calling their neighbours to see the mystery of the Virgin. Without the simplicity of their approach, our mission is doomed to failure.

The Church needs constantly to relearn the lesson of Aparecida; she must not lose sight of it. The Church’s nets are weak, perhaps patched; the Church’s barque is not as powerful as the great transatlantic liners which cross the ocean. And yet God wants to be seen precisely through our resources, scanty resources, because God is always the one who acts.

The results of our pastoral work do not depend on a wealth of resources, but on the creativity of love. To be sure, perseverance, effort, hard work, planning and organization all have their place, but first and foremost we need to realize that the Church’s power does not reside in herself; it is hidden in the deep waters of God, into which she is called to cast her nets.

Another lesson which the Church must constantly recall is that she cannot leave simplicity behind; otherwise she forgets how to speak the language of Mystery, and she herself remains outside the door of the mystery, and obviously, she proves incapable of approaching those who look to the Church for something which they themselves cannot provide, namely, God himself. At times we lose people because they don’t understand what we are saying, because we have forgotten the language of simplicity and import an intellectualism foreign to our people. Without the grammar of simplicity, the Church loses the very conditions which make it possible “to fish” for God in the deep waters of his Mystery.

A final thought: Aparecida took place at a crossroads. The road which linked Rio, the capital, with São Paulo, the resourceful province then being born, and Minas Gerais, the mines coveted by the courts of Europe, was a major intersection in colonial Brazil. God appears at the crossroads.